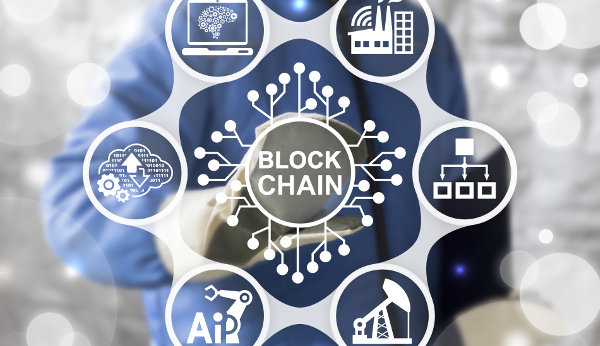 Blockchain is essentially a database that is home to constantly growing data records. It has got a distributive nature which means there is no parent computer that manages the entire chain of blockchain technology.

There are numerous nodes that participate in the system and have a copy of the chain. Nature is ever growing because silos of data keep adding to the database.

So, when a person adds a transaction to the chain, all the participating nodes in the link will validate that transaction. This is done by applying the algorithm to the transaction which verifies the validity.

The validity will differ from system to system and each valid transaction will be defined for a particular blockchain system. The majority of the participants will have to agree to validate the transaction.

A bundle of validated transactions are made into a block and then sent to all the nodes in the link. They also have to validate the new block created. Each successive block contains a hash, which is a unique fingerprint, of the previous block.

What are the challenges in Blockchain in IoT?

Scalability issues: The scalability problem vis-a-vis the size of Blockchain ledger may effectuate into centralization. The progress over the time entailed some sort of record management which raises questions of eclipsing the future of Blockchain technology.

Processing power and time: The Blockchain based IoT ecosystem is comprised of diverse devices that function on different computing capabilities. This means performing encryption algorithms will not be easy for the objects that are a part of Blockchain.

All these varied objects will not get along in running the same encryption algorithms at a particular speed as needed.

Storage will be a big problem: Blockchain does not need a central server for storing transactions and device Ids. The ledger has to be stored on the nodes themselves, and the ledger will definitely augment its size over a period of time.

This will go on to become something that is beyond the capabilities of different smart devices such as sensors, which do not have high storage capacity.

What are the risks of using Blockchain in IoT?

Since Blockchain is a relatively new technology and is in a very nascent stage, there may be numerous problems swept under the rug and have not been detected. The new technology will obviously come with new risks.

Therefore, it is imperative that an organization is prepared with its umbrella of mitigation plans before the hurricane of problems arrive. You must be ready with analysis, assessment, and reduction of the risks anticipated with the introduction of this technology.

The present-day trend is that most of the organizations looking to induct blockchain-based applications deploy the system completely in-house. They do not have the required skills and expertise to develop such a blockchain based system and also suffer from the inability to enforce smart contracts. The organizations refrain from reaching out for vendors for designing of blockchain applications.

The credibility of the vendors says a lot about the value of these blockchain applications. Since Blockchain-as-a-Service (BaaS) is in its incubation stage, business organizations should consider banking on vendors or blockchain development company that can cull out robust applications capable of mitigating the concomitant risks of the blockchain technology.

Credential Security: Blockchain is a very safe technology and the security is beefed up by its high-security levels. However, a blockchain based system’s security is dependent on the system’s access point. In present times, these systems do not provide multi-factor authentication.

This means that in a public blockchain system any individual having the private key of any user will be able to sign transactions on the public ledger. Another problem is that when an account’s private keys are lost, it will eventually lead to loss of data, funds, and other information managed by the account.

Legal and Compliance: There is no jurisprudence in the domain of blockchain technology which means there is a lack of a framework that determines right and their infringements. In the absence of any legal precedents to follow, there is a great risk posed on the IoT manufacturers and IoT development service providers.

This is a big challenge and is likely to become a bottleneck for businesses planning to switch over to Blockchain technology.

What is an ideal secure IoT Model?

A secure model of IoT is to be introduced with stringent validity checks, data encryption at all the levels, data verification, and authentication. In order to create an ideal secure model, the most important thing is to build in security in the very foundation of the IoT system.

In the absence of a secure and solid structure, the system will become very prone to threats and risks. The addition of different devices to the IoT will up the ante even more. The need of the hour is to design privacy protected IoT system.

Shahid Mansuri Co-founded Peerbits, one of the leading mobile app development company USA, in 2011 which provides Blockchain app development services. His visionary leadership and flamboyant management style have yield fruitful results for the company. He believes in sharing his strong knowledge base with learned concentration on entrepreneurship and business