How Does the Entry of Bollywood Celebrities Increase the NFT Craze in India? 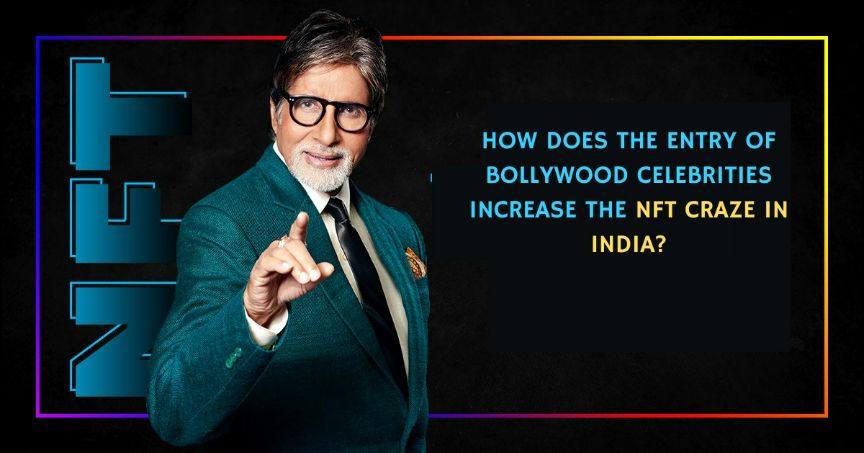 How Does the Entry of Bollywood Celebrities Increase the NFT Craze in India?

No more fans will have to ruffle through the crowd to get their favorite celebrities’ autographs or celebrity-featured merchandise. They can just tap into the NFT marketplace that features NFTs of celebrities. As the NFT marketplace is experiencing roaring growth these days, researchers and analysts predict that the marketplace will not be abated.

Will The Craze For NFTs Leap Forward, Or Deteriorate?

Though there isn’t an exact answer for this, we can speculate that the more the number of celebrities and corporates enter this sphere, the more will be the growth. Some of the famous brands have already stepped into this sphere by launching their iconic NFTs.

In this category, brands like Arizona Tea and Coca-Cola have launched their NFTs, which were released a few months ago. Arizona Tea is a beverage company based out of the US. They are popular for their tea mixes, energy drinks, and iced tea cocktails. Just last week, Arizona came up with its NFT, which is a comic-based one, in collaboration with Bored Ape Yacht Club.

The NFT arts of Arizona feature three bored apes, and one of them holds the iced tea can of Arizona. And notably, the number of collections available with them is limited to 10,000.

Similarly, Coca-Cola, too, has released its NFTs, which is quite interesting and makes sense. Basically, Coca-Cola’s NFT is a lot, which means it is a pack of non-fungible tokens.

Previously It Was OnlyFans And Now It’s NFT

These days, technology is holding a high hand on every aspect of our lives, which has become favorable for us. Alright! When the lockdown restrictions with respect to the pandemic were intense, celebrities and artists were struggling to find a source of monetization. That was when celebrities and talented artists explored the benefits of OnlyFans.

Artists and celebrities worldwide eyed OnlyFans as a platform where they can make money as well as keep their audience intact. On this platform, they can create and distribute different forms of content like images, videos, etc. For the majority of the days during the lockdown, this platform was the source of income for many artists (who were quite skilled in using it).

And now, celebrities and a horde of artists have started thronging towards the NFT trading platform. Notably, celebrities can sell any form of content that circles around them. For example, they can create NFTs that feature their movie collections or even their personal life. But there must be a high degree of rarity in each of the collections, and of course, that’s the definition of a non-fungible token.

What’s Brewing Up In The NFT Trading Platform Recently?

Amitabh Bachchan, the favorite actor for many and the amorously called Big B, has been the center of talk for the time he made his announcement on his NFTs. This news on the actor’s NFT collection appears on the news not just because he is a famous actor but also because he is the first actor in Indian cinema to move into the NFT space.

If you aren’t completely aware of his venture or holding a little bit of information about it, then here is the detailing. Amitabh, one of the most celebrated actors, has tied up with a Singapore-based NFT marketing and media management company Rhiti Entertainment to disclose his NFTs.

And now, the question would be about the types or categories of his collections. His collections range from voice notes to images. A special type of image called Big B punks, which are generated with respect to certain algorithms, is also one of the collections that reside in the collections.

Though the news on Amitabh Bachchan’s NFT collections is amplifying, we have to wait and watch whether the sales will satisfy the hype. However, on a broader scale, Big B’s historic venture into the non-fungible trading marketplace is believed to accelerate other actors worldwide, thereby bringing in more investors as well as creators.

Can You Expect More Such Celebrities?

A definite yes. In fact, two of the famous Bollywood actors Sunny Leone and Salman Khan, are in the pipeline to launch their versions of NFTs. While Amitabh Bachchan NFT is getting released on the NFT launchpad called BeyondLife.club, Salman Khan will release his collections on Bollychain, a platform that is exclusively developed for trading digital arts related to the film industry.

As the saying goes, “the future is unpredictable,” we have to watch the space to witness whether NFTs will sustain or the other way around. And heading back to square one, autographed Amitabh Bachchan’s NFT Physical Posters, BigB Punks, and NFT Arts will be shortly up for sale. Take a crack at the auction!