Bitcoin vs. Blockchain – How To Differentiate Blockchain and Bitcoin? 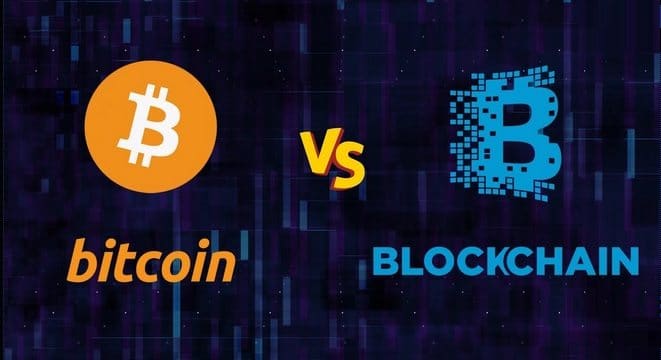 Bitcoin vs. Blockchain – How To Differentiate Blockchain and Bitcoin?

The term blockchain seems highly complex, and it surely can be. But the core concept of the Blockchain is straightforward. This is a kind of database. If you want to understand the Blockchain, then initially, you must try to understand what a database actually is. A database is mainly a collection of information which is reserved electronically on a PC. Any kind of information, or data, in databases, is structured well in table format in order to allow for easier filtering for information.

Spreadsheets are specially designed for user group for easy access and storage of limited information. Wherein the database includes specific amounts of data to be accessed, filtered & altered by different users at once.

Large-sized databases can house data on servers, specifically made of strong computers. These types of servers are built involving use of thousands of computers to have the computational power & easily accessible storage capacity for multiple users collectively. Wherein the spreadsheet or database may be accessible to many people. It is owned by business and managed by an appointed professional who takes the complete control of how it entirely works along with the data within it.

Is Blockchain a Secure Platform?

You might be aware that Blockchain technology is currently accountable for security and trust issues in various ways. Primarily, the new blocks are stored chronologically and linearly. To have a closer understanding of the Bitcoin’s Blockchain, understand that each block has a position on the chain, which is called as ‘height.’

Once the block gets added at the end of the Blockchain, it gets very challenging to go back and alter the block contents, until there’s consensus for editing. This happens because every block involves its own hash, along with the block before it and previously mentioned time-stamp. The hash codes are created with the math function, which transforms the digital information to a string of numbers & letters. In case the data is edited; obviously, the hash code also changes as well.

Let’s say, the hacker wants to first alter the Blockchain & then steal the Bitcoin. In case they were to change their copy, it would not be aligning with everyone else’s copy. If everyone else cross-references their copies, they would see this one copy stand out & that the hacker’s version of the chain would be casting away as invalid.

Bitcoin vs. Blockchain – The Difference Between Blockchain and Bitcoin

The main goal of Blockchain is to allow digital information to be recorded & distributed but not edited. You must be glad to know that Blockchain technology as outlined in the year 1991 by Stuart Haber and W. Scott Stornetta. These two researchers aimed to implement a system where document timestamps not to be tampered with. But with the launch of Bitcoin in the year 2009 in January, Blockchain comes up with its first real-world application.

Basically, the Bitcoin protocol is built on a blockchain. In a research paper, it has been introduced that the digital currency, Bitcoin’s pseudonymous creator referred to it as an advanced electronic cash system that’s fully peer-to-peer, with no trusted third party. The main thing which is focused on here is that Bitcoin hardly uses Blockchain.

Presently, there are a wide variety of blockchain-based projects to implement Blockchain with the techniques to help society other than just recording the transactions. For example, that the Blockchain being used as a way in order to vote in democratic elections. The nature of Blockchain’s stability means that fraudulent voting would become far more challenging to occur.

Blockchain is considered as a technology that underpins Bitcoin. It was developed for Bitcoin. So, bitcoin was the first example of Blockchain in action. Moreover, without Blockchain, there would be no Bitcoin present. That is why both terms are used interchangeably. But keep in mind that both the terms are not exactly the same. Bitcoin is just one example of a cryptocurrency, though other cryptocurrency networks are also powered via blockchain technology. Therefore, though Bitcoin uses blockchain technology in order to trade digital currency, the Blockchain is more than Bitcoin.

What is the Advantage of Using Blockchain Technology

1. Accuracy of the Chain

The transactions on the blockchain network are approved by a network of ample PCs. Therefore, it removes almost all human involvement in the process of process. Thus, it results in less human error and provides an accurate record of information.

Generally, the consumers pay a bank to verify the transaction or a notary to sign a document, to perform a marriage. Blockchain removes the requirement for third-party verification and reduces the associated costs. Business owners incur a small fee when they accept payments via credit cards. On the other hand, Bitcoin does not have a central authority and has a limited transaction fee.

Generally, the blockchains are open-source software. It means that everyone can view its code. This provides auditors the ability to review the cryptocurrencies such as Bitcoin for security. Moreover, it also shows that there is no absolute authority on who can control Bitcoin’s code. Thus, anyone can suggest changes to the system. In case, the majority of the network users agree that the new version of the code with the upgrade is worthwhile, then Bitcoin can be updated.

A Summary Of The Primary Differences Between Blockchain and Bitcoin

Here’s the wind up about the Blockchain and Bitcoin: