How Blockchain Can Make Your Business Data Safe 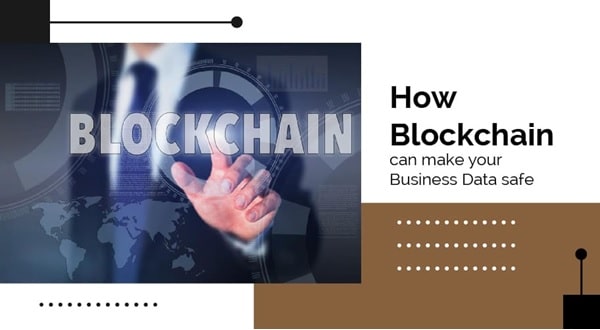 How Blockchain Can Make Your Business Data Safe

Blockchain has changed and transformed the way of doing business by allowing owners to remove the middleman in myriad vital services, reducing cost, and boosting efficiency. You can hire ICO marketer to implement blockchain in your business.

Security issues should concern those development institutions, businesses, and governments exploring blockchain development for more benefit, mobile bills, smart contracts, and much more. Similarly, social entrepreneurs must ask the same questions as they follow the potential for reasonable international payments and fair property rights along with complete access to finance.

Blockchain is mainly a distributed database shared between the nodes of a computer network. As a database, a blockchain can store information digitally in a digital format. They are known as the best for their vital role in cryptocurrency systems, for instance, bitcoin for maintaining a safe and uncentralized record of transactions.

The immense innovation in blockchain is that it will provide an assurance of faith and security of a record of the data and generate trust instead of the need for a third party.

A significant difference between a typical database and blockchain is how the data is formed. A blockchain will collect information together in one group, known as blocks that hold information. Each block will have a specific capacity of storage when filled, are closed, and linked with each other, which forms a chain of data known as a blockchain.

Blockchain marketing company can help you to promote blockchain projects for your business that is safe and secure.

Blockchain development has uncentralized security and faith in ample aspects. New blocks are always stored in a straight line and sequential manner to embark with. So it is always added at the end of the blockchain.

Once the block is added at the end of the blockchain, it is challenging to alter or modify any changes unless a majority of the network has decided to do so.

The reason behind it is that each of the blocks has its hash and a hash of the block before it, along with the time stamp mentioned previously.

Hash codes are developed with the help of mathematical functions, which will turn the digital information into a form of a string of numbers and letters. If you edit the stored data, the code of that block also changes. Such a storing process and hash code can save your data from hackers.

If you want a detailed guide about blockchain security, you can hire blockchain developers.

The transaction history of data can be more transparent with blockchain technology. As a result, blockchain is a type of separated ledger, and all network members share the same documentation as different to single copies.

The shared version can only be updated or changed through mutual decision, which means everyone must agree on it. To modify a single transaction record would need the alteration of each consequent history and the involvement of the entire network.

So data on the blockchain is more exact, compatible, and transparent. It is also available for all the members who have permission to access it. To change an individual transaction record in the block would require changing all the other records and the agreement of the entire network.

A plethora of ways are there in the blockchain, which is more secure than other record-keeping systems. Transactions must be confirmed before they are recorded. After the transaction is approved, it is encrypted and connected to the previous transaction. In addition to the fact that information is stored across the network of computers instead of individual servers makes it impossible for hackers to adjust the transaction data.

In any sector where protecting confidential data is integral to financial service, government, healthcare, and many more, blockchain will have an opportunity to change how critical information is shared by helping prevent fraud and other activities.

If your blockchain app development company deals with products and items traded with a complex supply chain, you will know how hard it can be to track a product back to its origin.

When the transfer of goods is registered on a blockchain, you will end up with an analysis track showing where an asset came from and every halt it took on its way.

Such transaction history data can help verify the reliability of assets and prevent extortion.

When one uses traditional, paper-heavy processes, transacting anything must be time-consuming and require much effort for the process that is liable to human error and generally requires the third party as a mediator.

By designing and automating such processes with blockchain, transactions can be completed securely, faster, and efficiently.

When record-keeping was performed using a single digital ledger shared among members, you don’t need to restore multiple ledgers, and you won’t have many clutters.

When everyone needs to access the same data, it will become easier to have faith in each other without the need for multiple mediators, resulting in clearing and settlement quickly.

For most business owners, reducing costs is a vital thing. With the help of blockchain, you won’t need any third parties interaction or a mediator to take a guarantee because it won’t matter whether you can trust your trading partner or not.

Alternate to it; you need to trust the data on the blockchain. You won’t even need to review so much documentation to finish the transactions because everyone will need permission to access a single, unchanged version.

In the modern world, where it is indispensable to keep your business data safe and confidential from fraud, cyber attacks, and hackers, blockchain provides peer-to-peer security to the data and every individual transaction.

If you have a doubt about blockchain’s safety, you need to refer to the above blog for getting detailed information and an understanding of the advantages of blockchain technology.