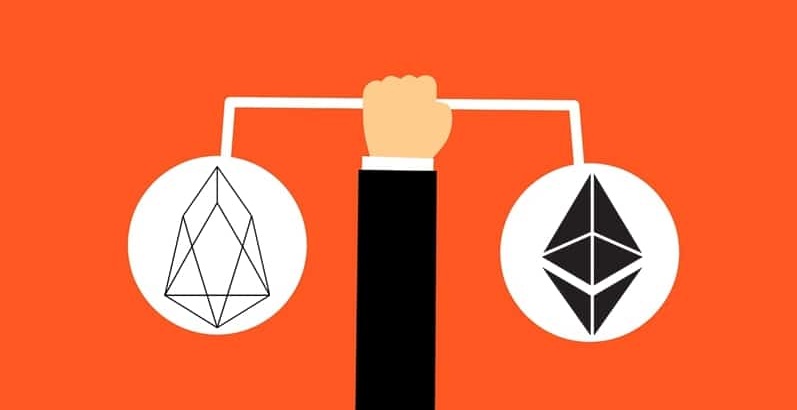 The rise and rise of Bitcoin prompted many blockchain enthusiasts to implement blockchain driven solutions for other real-world problems.

Vitalik Buterin is the founder of Ethereum Blockchain. Ethereum ecosystem is based on smart contracts.

Smart Contracts are computer protocols or codes that execute the pre-conditions of a contract.

Only if the pre-conditions are matched, the transactions or contract is executed.

Smart Contract can be partially or fully self-executing, self-enforcing, or both.

However, a recent development has challenged Ethereum’s crown. EOS, a young crypto based on an open source infrastructure, offers solutions and has all the features that make it the holy grail for decentralized apps.

Here are a few of the many key features of the EOS Blockchain.

The EOS Team is an ensemble of gritty successful entrepreneurs and technical experts that is a dream of all budding tech startups.

At top of the tree is CEO Brendan Blumer who also is one of the co-founders of Block.one.

Block.one is the parent company that oversees the EOS development, its deployment and fund management. Second to Brendan is CTO Daniel Larimer.

Daniel has already made a name for himself in the development circles as a designer of Steemit and Bitshares platform.

He lends his technical expertise to the project and oversees the development process. Other key figures include Bithump’s former CEO, Richard Jung as well as renowned experienced advisors like  Eric Schmidt and Mike Novogratz.

While Eric needs little introduction but still for those who don’t know Eric was Executive Chairman of Google from 2001 to 2015.

Whereas Mike Novogratz was an important pillar in Goldman Sachs Latin American and Asian Operations.

The core EOS team and its objective have attracted unparalleled reverence from one and all in the crypto circle.

The Flag Bearers for Decentralization

The advent of Blockchain or Bitcoin paved way for decentralized alternatives to long practiced centralized transactions.

However, the Bitcoin function was limited by functionality. It is for the efforts of people like Daniel Larimer that decentralized networks and solutions are now slowly becoming mainstream.

While the above projects have no doubt carried the Blockchain movement forward, the EOS was to overshadow both of them in terms of scale and impact.

While the earlier two were limited to a particular user-specific decentralized solution, the EOS promises an environment in itself that will facilitate the creation, hosting, fostering and nurturing of decentralized apps of all types and purpose.

The EOS it seems has overcome it and this perfectly places him to be the epicenter for all future dAPP projects.

EOS product development team has been hell-bent on developing futuristic scalable solutions and deliver a product that stays true to the promises it has made.

Some key technology ingredients that make EOS a perfect recipe for success are its innovative consensus model.

Unlike in Ethereum where proof of stake is feared to power a single stakeholder to direct block verifications as per his/her interests, the EOS implements DPOS (Delegated Proof of Stake).

The DPOS will reportedly have 21 block producers. This will check forks and misuse of stakes.

Secondly, another pressing issue is the long pitiable addresses which are hard to remember and most times difficult to read.

EOS users will be able to initiate any form transactions by their respective usernames alone.

Last but not the least a welcome change is sandboxing. Not only unusual app behavior on a user device will be immediately red flagged.

It will also be ensured that no apparent changes can be made that freezes the user account or dupes the network to steal.

Further  EOS gives its users the right to tag permissions with the data they share on the EOS Blockchain network.

This means that user can decide who can access the data and whether or not any third party can influence the data.

So what makes EOS a faster and better alternative than Ethereum?.

The pinpoint answer to this is tradeoffs. While Bitcoin uses Proof of Work and Ethereum employs Proof of Stake for validating blocks, both processes take time and are costly too.

This is where EOS uses DPOS technique.

The EOS ICO will last a full 341 days. This is staggering and unheard of before. No doubt many eyebrows were raised at the time but all prevailing skepticism has slowly but surely been put to rest.

It is now pegged to raise anything from $2.3 billion to $8 billion or even more. This could be the blockbuster ICO that legends would be written and folklores sang about.

What the EOS Promises Ahead?

The year-long EOS ICO will end up with Billions of dollars for EOS Team. This is no doubt a lot of money for a startup.

But it also brings a whole lot of responsibilities and mandatory promises that should be fulfilled at all cost.

With EOS confident of a decentralized system that is both scalable and lightning fast, we could see more and more transitions of current Ethereum based dAPPS into the EIS environment.