HODL Explained: What is A Hodl in Cryptocurrency? 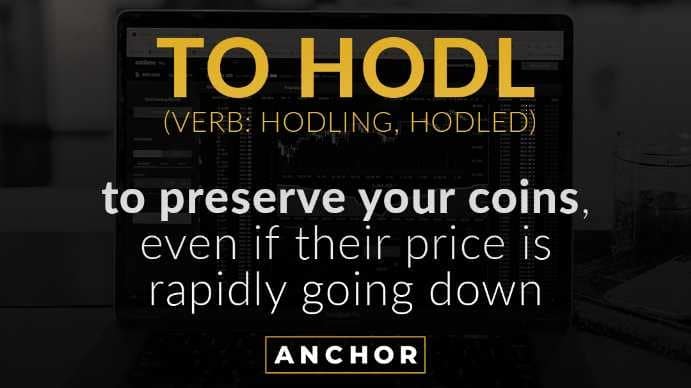 HODL Explained: What is A Hodl in Cryptocurrency?

“HODL” is a misspelling of “hold,” which is an attempt to avoid the impulse to panic sell when Bitcoin prices drop. It is often used in online cryptocurrency forums or in the comments section of Youtube videos that discuss Bitcoin trading.

The term “HODL” originates from a cryptocurrency forum post entitled “I AM HODLING” made in 2013.

The community that was rapidly growing around Bitcoin at the time had grown accustomed to seeing prices go up, and when the price suddenly began falling due to an unexpected government announcement, many were caught off guard.

Bitcoin is a revolutionary invention that has already changed the world of finance and will continue to do so. The original purpose of this paper was to present an unbiased view of what Bitcoin is, how it came about, and where it’s going. However, since I believe that knowledge without action leads nowhere, I encourage you to take some time off from reading this paper and go try out bitcoin for yourself. Find a friend who owns some bitcoins and buy some for yourself on their recommendation.

HODL is a term used in the digital currency world that means holding on to your coins or tokens rather than selling them. The idea of HODL came from a drunk post on Bitcoin Forum about bitcoin not being able to be traded but only held for future use.

A Bitcoin maximalist is someone who holds that Bitcoin has the greatest chance of success in the cryptocurrency market. A bitcoin maximalist believes that a certain protocol, such as Bitcoin’s blockchain, will dominate all others and become a standard across markets.

Is HODL A Good Investment in Cryptocurrencies?

While the word HODL is a frequently used slang in the cryptocurrency world, it has been criticized for being a bad advice. HODL does not mean anything in terms of investment strategy, but some people consider it as a bullish sign when they see the term in crypto forums and communities. However, there are already some critics who believe that HODL can be a good way to lose money.

What is the HODL strategy?

The HODL strategy is based on investment in cryptocurrency without the intention of selling. The investor believes that the value of the cryptocurrency will increase over time, which will result in profit when it is sold at a higher price.

HODL Risks: The thing that worries me the most about HODL is that 80% of all “crypto” tokens on the market today are outright scams, and the people.

HODLers will also have other criteria for selecting an exchange. One of the most important factors is that the exchange is safe. There are several ways to determine this. First, exchanges that are not regulated are often unsafe because they do not have to disclose company information. Second, exchanges with low fees tend to be unsafe because they cannot provide adequate security for user funds.

HODL is the opposite of FUD. While FUD is used to drive fear into investors, HODL is used to drive hope into them. Why are some people using this term? Because they are trying to encourage others not to sell their cryptocurrencies during a downturn in prices.