How Can the Government Save Millions With Blockchain? 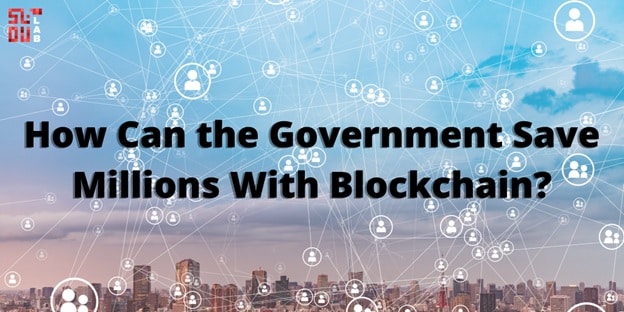 How Can the Government Save Millions With Blockchain?

Indeed blockchain would be the winner if there had been a trend maker award. In 2008, blockchain came up with an electronic currency approach; Satoshi Nakamoto invented it as an alternative finance system. The originator also glimpsed the backbone of cryptocurrency, the blockchain system. Since then, blockchain technology has received an enormous amount of wake-up calls from venture capitalists, industry leaders, and little startups.

Setting up a ICO development company would be one of the lucrative jobs available right now, as blockchain development is getting a lot of hype, and the future is also predictable; it’s the blockchain. Already, the blockchain industry was somewhere near $10 billion in 2018, and it’s expected to rise above $167 billion in the next ten years.

As blockchain hype is covering every industry, government organizations and central banks are also thinking about deploying blockchain technology. Examples will be given below, but for now, let’s talk about the features that blockchain can provide governments, among them saving money, fighting corruption, and many more. So, let’s begin!

Blockchain can help regain trust and ensure the proper division of the funding acquisition for each of them. Furthermore, having blockchain initiation in donation and funding channels will provide the appropriate usage of those funding also.

The actual thing needed for these developments is blockchain awareness. Appointing a blockchain development company would be the best decision for the donation sector, but full automation of donation acquisition and verification isn’t possible. Authority trespassing will be needed.

Government to Individual Relation and Transparency

A government can’t expose all information and data to its citizens and businesses also. Sensitive information related to Military, Healthcare, Medicine, and financial analysis requires utmost confidentiality, which blockchain networks can provide. Private and permissioned blockchain networks restrict intruders and allow only authorized persons to participate in a network.

If more privacy is needed, private data channels are there to provide top-notch privacy between participants. And, also blockchain supports a cross-chain compatibility system, which is also remarkable over decentralization and security features. With a cross-chain compatibility system, the government will save costs by avoiding networking in every blockchain network.

Government-enabled blockchain systems can also incorporate businesses and individuals as the verified participator, and together, all can store and share valuable data with no effort.

Government can use blockchain technology to get rid of election corruption, poll data manipulations, and voter registration trust issues.

Election, as a very confidential activity, requires utmost security against data leak or machine failure, and data hacking. A minuscule amount of data misplaced can totally disrupt the country, letting someone unworthy rule the country. Also, economic discrepancies can take place, inviting lots of other hurdles to disturb the growth of a nation.

Not only on a country level, state, or district level, but voting also needs to be maintained and automated with blockchain-based technologies. The decentralized and immutable features of blockchain technology help restrict data misplacement, manipulation, and vote corruption.

Voting-related solutions must be provided by veteran blockchain development service providers keeping in mind the related risks. Blockchain technology will help a lot, but at the biometrics and digital authentication level, those machines can be manipulated to disrupt voting progress. Full automation is also problematic in the beginning levels.

The estimated budget for operating all the necessary operations of a country is limited. Having a bar of extra chocolate out of their budget makes an average salary earner guilty; we’re talking about a whole industry with lots of non-rewarding expenses.

Tax filing and tax precession operations, providing salary to government employees, real estate listings, and any of the tasks holding an extensive list of expenses in the government budget can be replaced with blockchain-based solutions like private blockchain hyperledger and Smart Contracts.

Let’s understand it with an example. Fastag is a concept in the Indian toll plaza tax collection system, which works by scanning an attached QR code in a car with all the user information, and a scanner attached in toll plazas. The scanner scans those QR codes standing in plazas and deducts the tax automatically from the bank account. Automating this system with a blockchain network can reduce human interventions, and tax collection will be secure without any chance of discrepancies.

Registering land and land-related paperwork management is a big hustle for the government as well as the land wonders. Owing a piece of land and its proper right, without any land right integration issues, is considered lucky. While selling and buying property and land, both parties must be secure to avoid any unexpected problems.

Incorporating the blockchain system into land transferring and registering operations might increase the safety factor, ensuring transparency between the land register and the parties interchanging the land.

To conclude this discussion, the importance of blockchain technology in government operations is required. But, it’s also essential to understand the limitations of blockchain, with a good and dedicated blockchain development company to figure out and rectify the blockchain errors. Also, blockchain-related technologies like Defi and Metaverse require more development and research to meet government standard problems.

Indeed, blockchain prevalence will cut off the majority of corruption in land registration, tax filing, and other sectors; the World Economic Forum report clearly stated that. So, let’s hope for the best and qualify the rest.