The Complaints For $8 Are Raising for Twitter, Where Is This Leading? 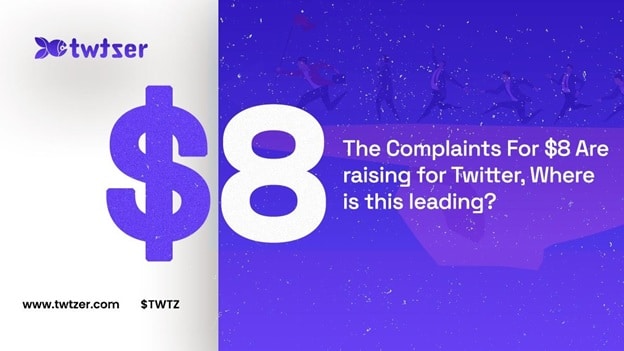 The Complaints For $8 Are Raising for Twitter, Where Is This Leading?

Elon Musk after becoming the new owner of the microblogging site is definitely giving Twitter a facelift. All new scenarios are seen around Twitter and right now we all know that the personality of Mr. Musk and his humorous replies are full of drama. Since the news broke about his takeover, we can barely think a day about what is awaiting next.

Initially, Elon Musk fired the top four Twitter executives including the former CEO, ex-finance chief, and ex-legal affairs & policy chief. Later, he gave an estimate to the company’s employees having the time base till November 7 to forge Twitter’s verification.

Some of the proven reports mention that verified users are advised to pay $20 monthly. In fact, after due consultations, the requisite fee was brought down to $8.

We can now relate that these two things are bound to happen. Firstly, the verification fee was sure to stay. Next, the monthly fee that employees need to pay is $8, and you cannot do anything about it. Regarding the recent mocks and discussions going on the web, Elon Musk is not bothered about the complaints raised by users.

Instead, he tweets an absurd expression “To all complainers, please continue complaining, but it will cost $8”. This already specifies anyone can complain about whatever things but the price isn’t changing.

Earlier, Elon Musk also declared that he plans to launch an $8 Twitter subscription service to authenticate and authorise subscribers, enhance the visibility of their posts, and enable the subscribers to view fewer ads.

According to his tweets and thinking, at odds with what everyone thinks, the verification tick is not introduced only for celebrities, instead, it is also for firms or individuals.

Following such a mindset are people having the tendency to attract and propose several followers. These individuals and firms usually accord fake accounts initiated by criminals. Lastly, the verification tick is a strategy to recognize and differentiate the official account from the parodies.

This resulted in charging fees

As a result, the great Elon Musk switched his Twitter certification naming to “Twitter Complaint Hotline Operator”. Not only the name but he also changed his display image avatar into a little boy answering the phone.

A series of improved measures after Musk joining Twitter has given rise to dissatisfaction among several users. At the moment, he is emotionless about user dissatisfaction.

Looking at the wavering situations of Twitter and employees, all should focus on how to gain upper hand on any platform you choose that will surely promise secure social media networking and a heads up.

While scrolling up the stuff, Twtzer impressed me in terms of a new project hosting the crowdfunding event of IPO giving almost 49% of the total shares in terms of TWTZ assets to the crowd saving the rest shares for development, team management, liquidity, and other purposes.

The Initial holders of 49% equity will receive lifetime dividend from project profit of ads and other services.

Nowadays, it’s difficult to find such potential platforms that offer you a great deal. While other social media platforms like Twitter, Facebook, TikTok, and Instagram, are taking users and security for granted, you are indirectly treated as a product instead of an entity. In the other scenario, this is a decentralized social networking platform built with blockchain security layers and sophisticated smart contracts. Check out more details about this new project on its official page.