Java: The Future Of Big Data And IoT 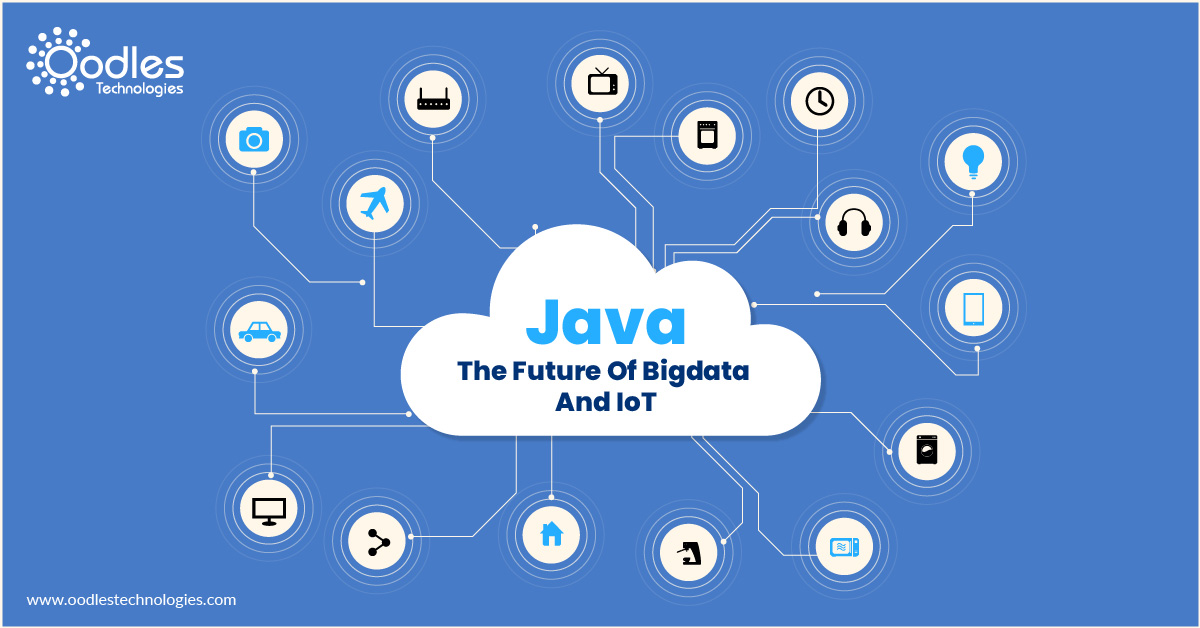 Java: The Future Of Big Data And IoT

Java is the tech industry’s most prominent programming language for many years. Software developers are making use of it to design robust and feature loaded applications. Java usage is not expected to reduce with time. In fact, it will only expand. Amplified data generated through devices need huge investment. Again, the generated data takes too much of the time to process which makes data analysis a time-consuming process.

Big Data is new to the technological world, and it is still evolving. So far people are interpreting its meaning in different ways but in reality, it is the data stored in a storage repository in the cloud. Data warehouses contain raw data in massive amounts that are used whenever needed. Big Data technologies tend to have an open source framework. For instance, Hadoop is an open source framework whose language is Java.

IoT is a warehouse of technologies designed to gather and manage a huge amount of data from different networks of electronic devices including sensors.  It then processes the collected data and shares with connected devices for real-time connections. One of the greatest examples of an intelligent networking system is the automatic security systems at banks.

Seeing Java’s compatibility with different software algorithms, we can say that it will be the future of Big data and IOT. How? Let’s take a deep dive to understand.

Role of Java in Big Data and IoT

IoT and Big Data have gained huge popularity in the tech world and with many innovative applications. Big Data consists of a large amount of high velocity structured and unstructured data from which valuable insights can be derived.

IoT is the inter-networking of different things including physical devices. Physical devices establish a network connection and exchange data with other devices. Devices or sensors like temperature sensor, GPS, pressure sensors, air quality sensors, moisture sensors, and light sensors can enable smart decisions when used together.

Most people today are connected with the Worldwide Web and the Internet. Internet of Things is producing data in abundance, therefore, there is a need to have Big Data technologies to manage, store and mine the data efficiently. Java plays a crucial role in efficiently storing and analyzing Big Data produced by IoT sources.

Easy Language: Jave offers the developers as well as the end users a better experience in comparison to other software design languages. It provides a smooth and easy interface that allows developers to create feature-rich apps. As a software designing language, Java minimizes the use of C++ traditions which makes it easier for developers to design applications without hassle.

Java is a highly sophisticated language. Developers feel safe using this language because of the versatility it offers. It can be used anytime, anywhere and is suitable to run on any software or hardware platform.

Java’s stack provision system re-establishes the statics quickly. It automates memory distribution and trash gathering which is not done by other programming or web development languages.

When industrial devices are operated, automated and managed from remote areas, stability is considered key. Java offers good security compliance due to which it is considered a secure programming language. It offers more security and stability when compared to other programming languages.  Java’s backward compatibility makes it the most preferred choice amongst Big Data Analytics Consulting Companies. It enables software developers to download any folder with unsolicited programmes which means any app can safely use the unsafe codes.

Hadoop is an open source software that uses a network of computers to solve problems related to the processing of large sets of data. Since the software for Big Data is Hadoop but Java is the language of Hadoop, therefore, software developers feel comfortable using it. Since the functioning of Big Data depends on Java, we can safely assume that Java is the future of Big Data.

Java, a programming language for the ages

Java as a programming language is easy to learn and is available everywhere including mobiles, desktops, PC, Mac, and health gears. It offers the best level of services in the Android app development services. Flexibility and versatility offered by Java to IoT programmers gravitate them towards it. More and more developers are learning this language because they know that this language will receive no set back even in the years to come. Developers with advanced knowledge in Java work on inventive IoT solutions to form a connected digital world.

One of the main reasons due to which IoT programmers are attracted towards Java is due to its virtual availability. It is easier for developers to migration from a different programming language to Java even within the existing framework. App developed using Java will be lesser prone to issues while migrating to a new platform and also the entire process will be lesser prone to errors.

“Write once, run everywhere”, that is what Java aims at. It gives the developer’s platform independence so that even when an application is transferred to a different platform, the transition will be less error-prone and smooth.  In industrial IoT, Java finds a special spot because it gets zero affinity with its hardware devices.

Hardware specifications change from one device to the other, therefore, it is difficult to assign a specific programming language to hardware devices.  Java offers portability which is why it is considered a perfect choice for programming IoT.

Java’s ability to upgrade itself as per the business requirements is immensely huge. It also has the capacity to manages itself without the errors. Developers can easily enhance product life-cycle using Java language.

Internet of Things includes various technologies like M2M computing, big data, sensors, hardware devices and more, therefore, its compatibility with other devices becomes difficult. Java is an interoperable language which can bring diverse devices together, making it suitable for running an IoT application.

Though Java is old but is everywhere. Big Data, Machine Learning and IoT are new to the technology industry. To deploy technologies like the Internet of Things or Big Data, there is a need to have a programming language compatible with different platforms or devices. Undeniably Java offers this compatibility to the IoT developers. Therefore, it is apt to say Java is the future of Big Data and IoT. But along with this, the developers need to ramp up with other latest technologies including the Big Data, Cloud, machine learning and other similar technologies. Apart from integrating Java with the Big Data or IoT, developers can deploy Java development services in other areas which includes Android app development, iOS development, Blockchain, and Minecraft to desktop applications like Eclipse, Netbeans, IntelliJ, and more.