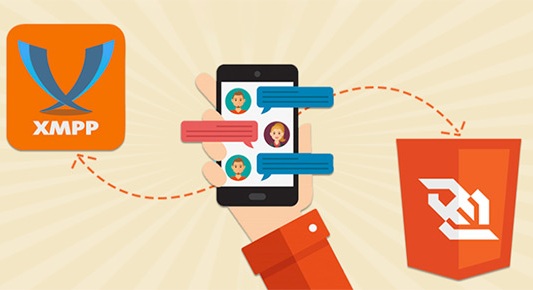 Victor Hugo once said, “Nothing is more powerful than an idea whose time has come”. Many ICO project develop a parallel XMPP server feature for Blockchain technology is one such idea.

What is XMPP and Instant Messaging?

XMPP stands for Extensible Messaging and Presence Protocol. To explain it in simple terms the reason why you and your friends can share content like texts, images, gifs, videos etc to and fro is because of this protocol.

It differs from the general HTTP protocol in the sense that in HTTP the client-server communication is one way whereas in XMPP it is both ways.

Due to slow blocks on the blockchain, the integration of XMPP will have high latency. But encrypted messaging may lead to IOS/Android wallet apps being able to have encrypted messaging conversations with external XMPP clients (trillian, jabber, etc).

Let’s try to understand the ins and outs of the IM Protocol or the XMPP architecture. We also throw light on some of the possible solution paths we are working on to migrate XMPP features on BlockChain.

One-to-One as well as Multi-Party Messaging

The above features make XMPP a goto feature for chat apps. Developers use these to make secure and easily scalable apps for app stores. Hence, a similar feature in blockchain will open the Pandora’s box for scalability.

Slow Blocks are the RoadBlocks

Scalability is a major roadblock for blockchain based systems or services. To scale a system that copies all the transaction it undertakes is a humongous task involving a lot of time, space and an extremely efficient resource management.

Ethereum is one of the many different blockchains. Let us look at some of its technical parameters.

In the last year or so, the demand for Ethereum network has increased manifold. This is mainly facilitated by the increasing number of ICO’s using Ethereum network. Hence the network is congested and loaded.

The blockchain is still a very raw technology with great untapped potential. Ethereum has deployed Raiden Network to resolve the scalability issue. This would be followed by the Metropolis and Serenity (Beta Solutions). Solution deployment will drain time, money and most important of them all: quality network architects. Plasma networks though in its infancy are supposed to increase tx/s to “billions per second”.