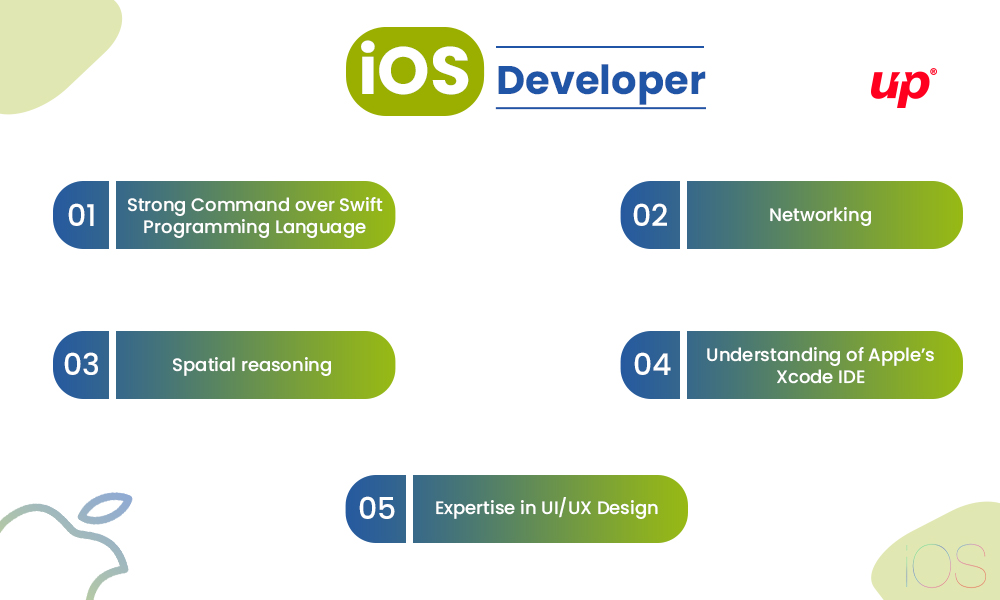 Well, as we all know that the procedure of choosing the right path for the career can be a little difficult, particularly in the technical domain.

Nowadays, the mobile app development industry is thriving and looking at the current situation it seems like the extent is expected to increase in the upcoming years. This simply means that there are many learning opportunities for career growth in this sector.

In this write-up, we will particularly focus on the key skills you need to have if you are planning to build your career as a top-notch iOS app developer.

Below listed are some of the key skills that you should hold expertise in, to be an iOS Developer:

It is important to have a strong command of the Swift programming language. It is one of the key skills that an iOS app developer should have to have a good career.

To be precise, you need to be familiar with all functionalities and features of Swift’s 3.0 programming language. As we know that Swift is a universal language that is owned by the tech giant Apple and all the iOS applications are built on it.

There are several functionalities that this programming language offers are Control Flow, Classes, Inheritance, Error Handling, and Initialization.

To be a skilled mobile app developer, you need to understand the importance of networking for app development.

Let take it more simply, first try to think of an app on your mobile phone that doesn’t act together with the web.

Could you think of any app?

Chances are less because almost every app we use needs the web in some way. For that reason, you need to know how to send and get data from the system while using the app.

Well, the way apps connect with a network is done through something usually referred to as JSON, which stands for JavaScript Object Notation.

That may sound complex if you’re not familiar with these terms, but it’s a normal format that’s quite simple.

Spatial reasoning is one of the necessary things to develop a mobile app.

Each application is designed in keeping the user in mind and how it will be beneficial for the user. To use this, you should have out of the box thinking to offer the matchless user experience to the end audience.

If you think sensibly according to the end-user, you will be competent in designing a unique interface and computing more handy functionalities that make your app a different one in the marketplace.

It will help users to use your website in a friendlier manner. As a developer, it’s your task to make the app more meaningful and useful.

In case you do not have a detailed understanding of Apple’s Xcode IDE, then you can’t think of becoming the best iOS app developer.

The Xcode IDE is the thing that helps you to make the app more genuine and make an iOS app work smoothly while offering an amazing user experience.

Starting from the journey of conceptualizing an idea for the coding part of the app development procedure, app developers need to have a thorough knowledge of the Xcode IDE.

The Xcode IDE is highly incorporated with various frameworks like Cocoa and Cocoa Touch.

Well, it is the primary environment for creating mobile apps for Apple devices like iPad, iPhone, Apple Watch and many more.

As a mobile app developer, you might be aware that both User Interface and User Experience are connected to the design of a mobile app or web application.

But these both terms when linked with functionalities, there are some major differences in both terms. On the whole, the User Interface (UI) is based on the looks of an app while the User Experience (UX) depends on how precisely the end-user is using the application.

Here we are going to discuss some key things that you need to keep an eye on while following the app design guidelines:

Delegate Pattern: The delegate pattern is a renowned technique that is used for the reason of passing information among objects in the Cocoa framework (Apple’s native object-oriented application programming interface).

This approach works well when there is only one recipient and one sender involved in the procedure.

In addition to the above-listed points, using notifications is another immense means of passing information from one place to another.

So if you want to be a skilled iOS app developer, then it is important to have a clear concept about all the things mentioned above. Always remember that an iOS developer is not just a developer; at each stage of the app development, you will be playing a vital role.

From gathering the specification for the client’s enterprise to designing a scalable UI to planning the development stage to coding and integrations, it is your responsibility to make sure that everything goes fine.

There are quite a lot of technical courses available online that offer systematic iOS app development training. You can register the courses online and become a leader.

So, these are some of the top skills that will help you in becoming the best mobile iOS developers in the industry. However, to become an app developer, you need to master a different skill set that is particularly designed for the iOS platform.